The past three days have been eventful. On Saturday, my brother fell fifteen feet out of a tree and broke his back. Yesterday, a piece flew off the roof of my rented home and damaged a neighbour’s car. While storm Ophelia raged outside, my grandfather’s cousin passed away peacefully surrounded by his family.

Outside of my tiny sphere of experience, three people lost their lives because of Ophelia and many more people are assessing damage of property and vehicles and trees and roads and waiting for the electricity to come back on (it could take up to ten days for some).

I can’t answer the question of “Where was God when…?” for the vast majority of situations, but I could clearly see where He was this weekend in my own realm of experience.

My brother was harnessed to two branches as he cut other branches off the top of the tree. He moved the first anchor to another branch and when he went to move the second one, the first branch snapped.

Where was God? Why didn’t He catch him or prevent it from happening.

He was right there the whole time.

A number of things happened immediately after my brother falling where I can clearly see God’s fingerprints and want to give Him thanks for.

Don’t get me wrong. Everything hurts like hell and basic things like buttering bread are impossible right now but so many more things went right.

Then last night, as I was weathering out Ophelia in my parents’ house, my own housemate messaged me: the neighbour had called round to say that a part of our roof had blown off and damaged his car. He wasn’t so concerned about the car, which his own insurance will cover, but he was worried that our damaged roof would leak, causing more damage inside the house.

Oh the joy of flat roofs!

There was nothing to be done until this morning, when the winds had died down. Our maintenance man hopped up on the roof and smiled the good news: it wasn’t a piece of our roof that had blown off, but the cover of our water tank- much less troublesome to repair and no fear of leaking through the structure of our house! Good job, God!

When members of our prayer team lead people through inner healing, we have them revisit painful memories and ask the question, “Where was God when this happened?” I am continually amazed and delighted at the person’s response when they see Jesus standing between them and the teacher shouting nasty things at them as a seven year old, absorbing the hurtful words; or holding them and comforting them after sexual abuse has taken place.

Every memory/thought has emotion attached to it. Inviting Jesus into the memory, allowing Him to show us where He was and what He was doing, has an incredible way of taking the intense pain out of these memories and allowing them to heal. The facts don’t change, but their harmful effects on our current behaviour and reactions do.

Then this morning, one of our Life Group* leaders shared this message: 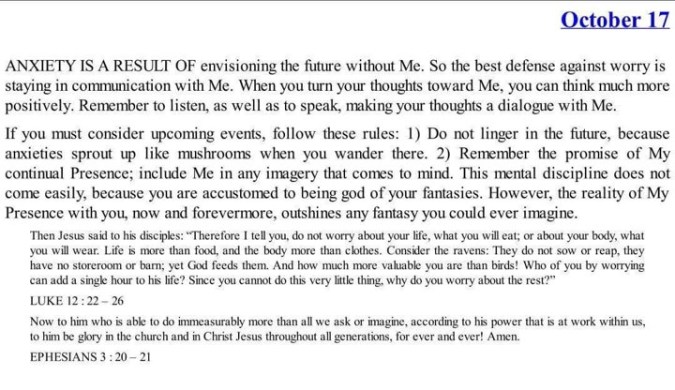 I love that line: “[when imagining the future] include Me in any imagery that comes to mind”. I have some experience of asking God where He was in past events, but never thought to look for Him in my future- duh! As someone who has been prone to paralysing fear (especially in the mornings) this gives me immense encouragement.

I look forward to asking that question every morning, “God where are you?”, not out of anger or fear, but out of hope and expectancy.

*Weekly groups that meet to read the Word, encourage and challenge one another to grow in their respective relationships with God and so become better at loving God and loving others.